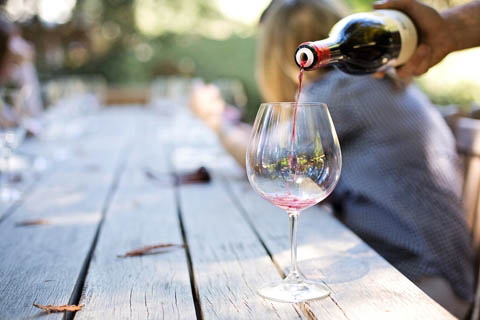 At my clinic in  Sydney I see many people for hypnotherapy who have developed wine drinking problems. Until the 1960s, wine was only drunk in many countries by the wealthy and upper middle classes, typically in restaurants of high-class hotels.

At that time a mass marketing campaign brought wine to bistros and bars. It began to become chic to drink wine and was a sign of being socially upwardly mobile. The marketing was so successful that boutique wine shops were opened in in the l970s and then supermarkets and wine store chains entered the market in the 1980s when sales exploded.

Alcohol is a poison that has devastating effects on the body.

It increases oxidation in the blood, reduces oxygen to parts of the body, kills brain cells, decreases the capacity of the liver, immune systems, cognitive abilities and powers of all five senses: sight, sound, touch, smell and taste.

It also leads directly to chronic illnesses such as cancer, cardio vascular disease, heart failure, stroke, diabetes, obesity, inflammation and dementia, to name just a few. The 2018 Cambridge study of over 600,000 people found that drinking alcohol can knock years off your life span, and in people with drinking problems, maybe even decades.

We use it medically as an antiseptic as it can kill bacteria, so just imagine what excess amounts of alcohol might be doing to the cells inside your body.

We also use it to infuse the medical properties of herbs, but it is administered in very small amounts to deliver those properties.

If you have a problem with wine consumption you might like to consider the figures regarding liver detoxification.

The liver of a young, healthy male will detox the alcohol through the liver at one unit per hour, so if they drink a bottle of wine, they are under the influence of alcohol for 9 hours.

You’re likely to feel pretty rough the next day because your body has taken up so much energy trying to get rid of the alcohol, which it sees as poison.

Females take longer to detox because they carry more fat tissue and less water in their muscles which also means they can get drunk quicker and the liver detoxes more slowly.

The more you put on weight and the older you get, the slower the detoxification process. So, an overweight woman aged 40 or over may be under the influence of a bottle of wine for 12 hours or more.

For those who have severe drinking problems and are drinking up to two or more bottles of wine a day, you may never actually be sober.

This is because the liver just cannot cope anymore when you are drunk, or if you are constantly drinking, the body starts to try and get rid of the alcohol through the skin and this is why alcoholics smell of alcohol and stale sweat.

It is an illusion that wine is chic and if you think that, you have been the victim of marketing and your peers who have also believed what they have been told by marketers.

Marketers have even told you that a little wine is good for the heart because it contains chemicals called anthocyanins and resveratrol. The reality is that the alcohol is the carrier for these chemicals that keep our blood vessels open, but the alcohol itself collapses the vessels, and in the end, the alcohol always wins. So, the truth is that wine actually harms your brain and your body.

If you are having problems with drinking wine and want help, I am a specialist in addiction recovery using hypnotherapy in Sydney to help people stop drinking, fast. I also train other hypnotherapists in treating people with alcohol addiction. Call my clinic on 02 8021 6429 to book an appointment.